The Benefits of Coconut Water

Mmmmm Coconut Water, we just LOVE it!  And for good reason because coconuts aren’t just a decorative drink to accompany you on some tropical beach.  This gift from Mother Nature is fast becoming the go-to nourishing beverage of choice for avid gym goers the world over and we aren’t blaming them.

First things first, just know that coconut water and coconut milk are two very separate things. Coconut milk, coconut cream, and coconut oil are all products made from the meat of the coconut.  Coconut water is all-natural carbs, straight up. A clear, sweet liquid with a nutty taste, it’s found inside young, green coconuts; the sterile water is usually harvested at the nine-month point.  So, when you buy a fresh coconut, you can literally crack it open, pop in a straw and sip away. 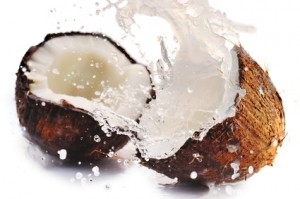 So what’s all the fuss?  Is it really good for you?

Coconut water has been anointed nature’s sports drink and is appearing in gyms and yoga studios around the country.  It is an excellent, super hydrating alternative to water because of its high electrolyte content, the minerals vital for bodily functions such as muscle movement, brain operation and nerve transmission. It has a slightly sweet flavour to combat sugar cravings, and is especially rich in potassium and sodium, along with magnesium, calcium, phosphorus, manganese and zinc which your body requires to replenish itself. So as you can see, coconut water is pretty awesome!!

It is gluten, allergy free and unsweetened, coming straight from the coconut to you.  Just the way nature intended!
Coconut water is a natural isotonic containing 15 times the amount of potassium found in the equivalent volume of most sports drinks.
Coconut water has 5mg of natural sugars where sports and energy drinks range from 10-25mg of altered sugars.
It contains no fat, no cholesterol, and no preservatives.
The powerhouse of potassium in coconut water can also promote kidney and heart health, protecting your ticker by helping to lower blood pressure.

Is there a catch?

If you are going to drink a pre-packaged coconut drink (not straight out of the coconut), check the ingredients before you start drinking. It’s important to read the label for added sugars.  Choose the unflavored, natural varieties; otherwise, you might be consuming all that added sugar that you would get from fruit juice or a soda.Someone looking to cut calories may want to avoid  drinking lots of coconut water, too. Consider the added calories that coconut water provides — generally 46 calories per cup — while water has zero calories.