For experienced and dedicated runners the barefoot running debate has prompted a lot of discussion. These discussions center around the benefits and risks associated with this new technique.

My definition of bare foot running is: to run barefoot or in a device that provides no support, heel counter and has no shock absorption properties.

There are many shoes that sit between a barefoot running device and a traditional running shoe. These shoes range from Vibrams to Nike frees. Shoes in this range all vary in the effect they will have on your gait. Due to this and the large range of shoes that are currently on the market, I have chosen not to discuss individual shoes here.
In this article I have provided more information about what I believe are the key points to consider related to this issue. They include: foot strike patterns, shock attenuation, training and proprioceptive feed back and how these will effect energy expenditure, injuries and injury rates. In this article I hope to discuss many of these issues in more detail. 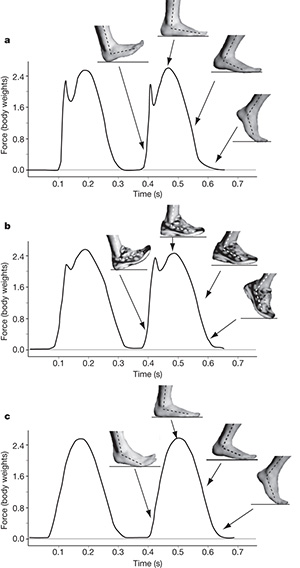 The largest visual change between shod and bare foot running is most commonly seen in the way the foot hits the ground. Habitually and also seen clinically barefoot endurance runners often land with a fore- foot strike, sometimes with a mid-foot strike. In contrast shod runners most commonly land with a rear-foot strike. In a typical running shoe there is a 10-14mm heel lift as part of the standard make up, this lift encourages heel strike during gait. Much of the debate around bare-foot running is associated with a presumed increase in fore–foot loading. This difference in the way the foot contacts the ground, changes both the runner’s ability to absorb shock and the amount of energy they use when running.

Kinematic analysis shows, no matter the surface, being shod or not, fore- foot strikers generate smaller collision forces than rear-foot strikers. Rear-foot strikers commonly have a high impact transient which can be seen as the spike on the image (image shows vertical ground reaction forces and foot kinematics for three foot strikes at 3.5 m/s in the same runner). When running with a fore- foot strike there is an increased amount of shock absorbed in your calf muscles. Conversely normal cross trainers have the ability to absorb large amounts of shock through the materials used in the heel of the shoe.

Oxygen cost and heart rate have been looked at in numerous studies, most showing that you use slightly less energy when running bare foot. There have been different explanations for this which include:

One study by Divert et.al 2008 found, for every extra 100 grams you add per foot, it made the runner consume about 1% more oxygen. But if you look at equal-weight conditions, the shoes appear to provide an overall drop in energy consumption of 3-4%. The authors of this study conclude that running barefoot offers no metabolic advantage over running in lightweight, cushioned shoes.

There is also a solid argument that claims that each individual will run in a way that is most economical to them and their make up. Another study by Dallam et.al 2005 showed a 7.6% increase in Oxygen use when a group of elite habitual rear- foot strikers where taught to run with a mid- foot strike. 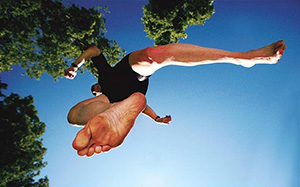 Barefoot runners will commonly have:

Rear foot runners will commonly have:

Many factors can contribute to the risk of injury including prior injuries, gender, body weight, flexibility, shoes, core strength, and training frequency and intensity. Articles on injury association vary on population sizes and the inclusion of rear, mid and fore- foot or just rear and fore- foot striking. I think Walther (2005) is one of the better articles published showing – 1203 runners; no difference in incidence of injury between rear-foot and forefoot strikers; however, the location and kind of injury and complaints differ. This is a good representation of what I see clinically. Barefoot runners have a much higher incidence of Achilles, calf, metatarsal stress fractures and forefoot injuries whereas runners using a cross trainers showed increased quads injuries and fat pad compression.

A clear advantage to barefoot running is the increased proprioceptive feedback your body receives. Without a thin foam layer between your foot and the ground your body has a greater sense of where it is in space. I don’t think this is of great advantage for your normal fun run, but it will do no harm.

Unfortunately with all the research being done on the effects of barefoot running, at the moment we have more questions than we do answers.

Clinically I am yet to recommend a patient to change to barefoot running. That said, I am not completely against the idea. I have heard of professional athletes that have made the change for a specific reason with good outcomes: either to replicate match play or to avoid loading of a damaged structure. They have made a very well measured decision to change their gait under the guidance and support generally of a Physiotherapist/Osteopath, Exercise scientist and a Podiatrist.

Josh Osborne is a podiatrist at Stay Tuned Sports Medicine practicing from the Boronia clinic. Contact 9462 9478 or www.staytuned.com.au for more details.

Download this article as a PDF. Biomechanics of Barefoot Running