Vitamin D is a group of fat-soluble secosteroids. In humans, vitamin D is unique because it can be ingested and because the body can also synthesize it (from cholesterol) when sun exposure is adequate (hence its nickname, the “sunshine vitamin”).

Although vitamin D is commonly called a vitamin, it is not actually an essential dietary vitamin in the strict sense, as it can be synthesized in adequate amounts by all mammals from sunlight. An organic chemical compound (or related set of compounds) is only scientifically called a vitamin when it cannot be synthesized in sufficient quantities by an organism, and must be obtained from the diet. However, as with other compounds commonly called vitamins, vitamin D was discovered in an effort to find the dietary substance that was lacking in a disease, namely, rickets the childhood form of osteomalacia. Additionally, like other compounds called vitamins, in the developed world vitamin D is added to staple foods, such as milk, to avoid disease due to deficiency. 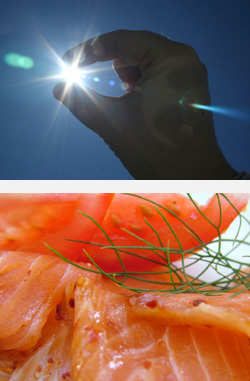 Vitamin D2 is obtained from the UV irradiation of the yeast sterol ergosterol and is found naturally in sun-exposed mushrooms. Human beings do not make vitamin D2.

Humans synthesize vitamin D3 from UVB sunlight, so it is the most “natural” form. Most oil-rich fish such as salmon, mackerel, and herring also contain vitamin D3.

Vitamin D (D represents D2, or D3, or both) that is ingested is absorbed into the lymphatic system and enters the venous blood. Vitamin D that comes from the skin or diet is biologically inert and is required to undertake the completion of a number of biological processes before the body can make use of it.

Without vitamin D, only 10–15% of dietary calcium and about 60% of phosphorus are absorbed. Vitamin D sufficiency enhances calcium and phosphorus absorption by 30–40% and 80%, respectively.

This pandemic can mainly be attributed to lifestyle (for example, reduced outdoor activities) and environmental (for example, air pollution) factors that reduce exposure to sunlight, which is required for ultraviolet-B (UVB)-induced vitamin D production in the skin. High prevalence of vitamin D insufficiency is a particularly important public health issue because VDD is an independent risk factor for total mortality in the general population. Current studies suggest that we may need more vitamin D than presently recommended to prevent chronic disease. As the number of people with VDD continues to increase, the importance of this hormone in overall health and the prevention of chronic diseases are at the forefront of research. VDD is very common in all age groups.

The major source of vitamin D for children and adults is exposure to natural sunlight. Thus, the major cause of VDD is inadequate exposure to sunlight. Wearing a sunscreen with a sun protection factor of 30 reduces vitamin D synthesis in the skin by more than 95%. People with a naturally dark skin tone have natural sun protection and require at least three to five times longer exposure to make the same amount of vitamin D as a person with a white skin tone. There is an inverse association of serum 25(OH)D (a precursor of Vitamin D) and body mass index (BMI) greater than 30, and thus, obesity is associated with VDD.

An inadequate calcium–phosphorus product causes a mineralization defect in the skeleton. In young children who have little mineral in their skeleton, this defect results in a variety of skeletal deformities classically known as rickets. VDD also causes muscle weakness; affected children have difficulty in standing and walking, whereas the elderly have increasing sway and more frequent falls, thereby increasing their risk of fracture.

What can you do to increase your Vitamin D levels?

A major source of vitamin D for most humans is synthesized from the exposure of the skin to sunlight typically between 1000 h and 1500 h in the spring, summer, and fall.

Vitamin D produced in the skin may last at least twice as long in the blood compared with ingested vitamin D.

When an adult wearing a bathing suit is exposed to one minimal erythemal dose of UV radiation (a slight pinkness to the skin 24 h after exposure), the amount of vitamin D produced is equivalent to ingesting between 10,000 and 25,000 IU. 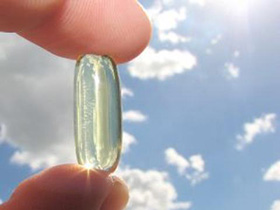 At the end of the day, the best thing you can do is get outside and absorb as much as you can when the sun is out. Go for walks in your lunchbreak if you can and try to expose wrists and forearms to the sun at the very least for a minimum of 15 – 30 minutes.