Having an ACL reconstruction is never going to be easy, having gone through one myself in 2017 I can tell you it’s no walk in the park. However, there are ways to make life a bit more bearable – especially in the first few weeks. 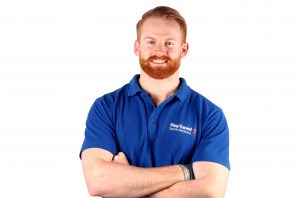 1) Get a plastic chair for the shower

This might sound silly but after your surgery you’ll experience a significant feeling of instability, and the last thing you need is a slippery shower floor increasing that unstable feeling.
I found that putting a plastic chair in the shower is an easy way to feel safe in the shower during those first two to three weeks while you work on getting your knee nice and stable.

2) Change up your theraband position for leg extensions at home

If you’re working on waking up that pesky VMO at home. You’re most likely doing some form of leg extensions. A common form of this are sitting down using a theraband. Now what can commonly happen (and what happened to me) is that the theraband slides up the leg, which can be annoying and uncomfortable. However, if you twist the theraband around your foot this whole issue goes away!

3) If prescribed pain medication, take them before exercising

This is a practice routinely used for rehab in the hospital setting but is often overlooked for ACL rehab. The underlying principle here is that some rehab exercises are meant to be uncomfortable in order to create positive change in the knee joint, so why not utilise your prescribed pain medication and minimise this discomfort. Your doctor and rehab practitioner can advise you on the best way to achieve this. For me it was most useful in my first days in a proper gym doing more complex exercises.

Even in the later stages of my rehab, reaching terminal knee extension was always an issue for me. When an osteo taught me this trick, it made life that much easier. The main issue with extension exercises is that they are boring and monotonous and sometimes need to still be performed in the later stages of rehab. This can lead to them often being neglected. This handy trick means you can do your rehab even while watching TV or getting into that new Netflix show.

5) Use crutches as a walking aid, not a walking substitute

Regaining proper gait (walking style) is a critical stage in your early rehab so trying to walk normally will be advised. At the same time walking without crutches can be painful and potentially pretty scary, so the best way to regain optimal gait while still having support is to only lightly use the crutches to support the affected leg while trying to walk normally.

You might feel a bit silly walking backwards around the house/on a treadmill but trust me this is one of the best things you can do to help gain knee extension! In the early stages of your rehab one of the main goals is to wake up your VMO and gain the ability to lock out your knee in extension. Walking backwards encourages your knee to extend more so than walking forwards and is an easy and effective exercise to do.

7) Be mindful of your mental health during recovery

One major aspect of your rehab journey that is rarely talked about is the effect it has on your mental health – especially if you are an athlete. You may go from training three times a week with a game on the weekend, plus some gym work down to nothing at all and in bed all day for weeks. This has a profound effect on active people, and indeed most people, as it may cause a significant drop in mood and quite a bit of frustration about the lack of physical activity in your week. The following three tips are a few things I used during my rehab, and always prescribe to my ACL patients, to overcome the mental health challenges.

8) Turn your rehab into a circuit, and make it challenging

The initial rehab exercises you will be given in the first few weeks of recovery may seem incredibly simple and, let’s face it, boring. While you may be excited to finally be able to do anything at all initially, the monotonous nature of these exercises will hinder that excitement all too soon. The best way to make these exercises a little more exciting is to turn them into a fitness-like circuit. An example could be 3 laps of: Squatsx8, leg extensions x15, leg raises x10, VMO activations x20, or something similar. It is important also to make these circuits challenging, this way you can    progress more quickly through your rehab and also you may find it gives off a more satisfying endorphin release afterwards.

9) Still try to make every training

It goes without saying that low moods are often fixed around friends and family, and this couldn’t be truer in the sporting setting. Making yourself get down to each training is potentially one of the most powerful ways to keep upbeat during your rehab. You will be motivated when you see your teammates working hard, you will receive plenty of support from the coaching staff as well as your teammates, and being in the same routine that you were in pre-injury is also a powerful tool in staying upbeat. I found this to also be very motivating, as I knew that the harder I     worked the quicker I would be back out there with my mates. The only downside is it will hurt seeing the team doing things that you won’t be able to do for a few months, and trust me that hurts more than any rehab exercise – so use it as motivation!

As you can probably tell from the last few tips, the key to overcoming the mental challenges is to keep your brain occupied, and with me that was all about borrowing my mate’s PS2 and playing my favourite childhood game – Crash Bandicoot. It did wonders for me, as well as give me a good nostalgia kick. Whatever your vice, Netflix, Stan, a good book, or a video game, it will do wonders to keep you occupied and make the seemingly endless days cooped up in bed much more bearable.